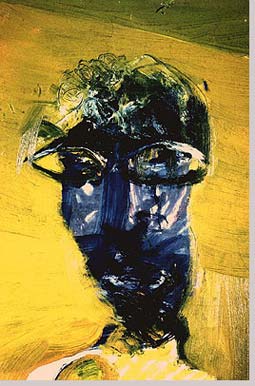 Wayne Ashton and his Painting

A critique by Dr David Bromfield

Wayne Ashton, author of the critically acclaimed novel Under a Tin-Grey Sari, is a superb painter. As that rare combination of a committed writer and a dedicated painter, he works full time from project to project. Few Western writers have succeeded with painting, D.H Lawrence perhaps. Successful writers often feel themselves to be painters manques, even if they never pick up a brush.

Patrick White, the greatest Australian novelist, revealed his intimacy with Australian painting in almost every image and description he produced. In both art forms it is structure, the careful accumulation of painted marks - made in a moment, or words - moments of sound, that transforms a mere image into a vital icon. It is the ordering of such icons that builds an atmosphere where one's imagination can live and breathe.

The new paintings from his studio, after travelling around Australia to read from his book at festivals, explore one of his favourite themes: the timeless interaction of land and water that has been an emblem of human existence and experience as long as we have been moving round the globe. Wayne has worked with a limited range of colours to produce images redolent with universal sensuality and the most luxuriant of memories.

For two decades Wayne has worked hard at both practices. His technical rigour, his dedication to slow mastery of both artforms, is unusual. It seems to me that he uses the practical demands of painting as a way to model, order and observe the movement of memories into figured imaginings, that this pattern of experience shapes the figure of all he writes. The poetry of his painting informs, is at one with, that of his writing.

He made Down South With Libby (2003) after a journey to the South coast of Western Australia. It is the collection of moments, crystallised and inscribed as painterly gestures woven into the texture of vivacious brush marks that makes up the simple landscape schema, which itself holds night and day, moon, clouds and sunshine in a vital rush of being. This is nothing casual. Wayne is weighing the colour, pitch and energy of each mark against his memories. Consider the contrast between the broad blue rippling of brushstrokes in the sky and the upright trees blazing with visionary life in short strokes of cinnamon, red ochre and white, or the various images of fish locked into the complex surface of the sea. This vision of the landscape as a ground against which we figure our actions, our very being, is particularly, if not peculiarly, Australian. It resonates with experience in a land that, for recently transplanted Europeans, is, necessarily, empty of myth and memory. It was discovered and developed by the post war generations of Australian painters from Arthur Boyd and Sidney Nolan to Brett Whiteley. Wayne clearly feels an affinity with them and has worked through it. Again this is unusual. Nearly all Australian painters have avoided any relationship to previous generations. They looked instead to the latest thing from overseas.

Perhaps it is Wayne's interest in technique as a physical accumulation of memories that has made him one of the few contemporary Australian painters who act as though we had a tradition. The simple format of Waterhole & Moon (2003), the flickering luminescence of the tree, the literal, flat material yellow of the moon's reflection can all be found in the work of post war generations. Wayne has added a specific magic of his own, a poetry of the moment, taken from elsewhere.

Before his landscapes I think of the flat enamel-like surfaces of Moghul manuscripts, inflected by the lightest of lines and the most subtle paterns, poetic images shaped by myth, steeped in stories that supercharge every image. Again Wayne's vibrant line recalls the mystic William Blake who charted the flow of life through all things in the most pristine of neoclassic curves. The vivacious balance of imagery and texture in Wayne's Two Islands charts the way to paradise. Wayne's visionary landscapes assuage our unrequited longing for a mythic presence, beyond all personal memory.

In an earlier series of works (2000/2001) he treats his other great theme, the human face, in a similar way. In these paintings the face opens up into a landscape of memory and incident, an allegory of infinite presence. At its simplest, in The Architect for instance, this leads to a head embedded in a mass of painterly gestures, so that its presence emerges from the painter's 'struggle' with the medium. This kind of painting is often described as 'existential', because there is no intermediate level of symbolism or form between the medium and the face. Even The Architect suggests that Wayne prefers a more diffuse, mythic human presence, lodged intractably in the landscape. The lower half of the architect's face contains a stormy sky and sea.

In Head and Fish, the face, with fish for eyes, is locked into a green land in front of a green sky illuminated by a vast yellow moon worthy of Max Ernst. Like the surrealists Wayne rejoices in the night that softens edges, mutes colours and returns us to the magic realms of everywhere and nowhere.

The face of his Retired Surf Lifesaver also has fish for eyes, ready to slip from their sockets and swim forever in the ocean blue at which he has stared for so long that it has stained his soul. The rugged pink and yellow impasto of his craggy expression has been carefully modelled into a painterly geology, a survey of one's life as an uninhabited, empty island. Other heads appear inspired by Indian themes, notably the 1997 series Iltutmish and Her Ruling Court of Advisers which is derived from the 12th century's first woman to rule India, the seventeen year old Iltutmish.

Wayne's painting has a rare richness of surface and texture, a thrilling presence so dense that one reaches for the wide-eyed openess of childhood to aid one's naked vision.